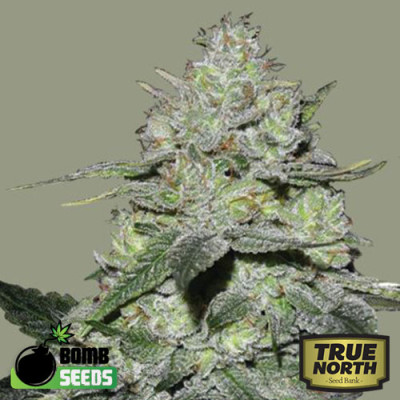 One of the most talked about and arguably strongest strains of recent years, is the Insanely sticky Gorilla Glue. Huge amounts of resin and a great sour piney aroma make this a great variety to work with; so we have given it the full Bomb treatment!

We were very fortunate to be given a clone of the #4 pheno back in early 2013 and immediately began to cross these outstanding genetics with our very own signature THC BOMB. The sole purpose was to inject even more oozing resin into this already trichome laden lady.

The results were spectacular. As a Sativa dominant hybrid the immediate effect of smoking Gorilla Bomb is uplifting and energetic. The powerful head rush will continue to roll over you in waves until you are firmly settled in to a deep relaxing euphoria.

But be warned, this is not classed as one of the strongest strains on the planet for fun! If you continue to hit on this, it will very quickly stick you to your couch like its famous namesake Gorilla Glue.

The flavor is a superb blend of sweet and sour chocolate, followed by the distinct fuel after-tang thanks to its diesel heritage. This taste is initially quite subtle but really builds in the mouth so the exhale has a very potent flavor.

When growing Glue Bomb you can really go to town with nutrients in the later stages of Vegetation and all throughout flowering, if you feed her well you will be rewarded with very thick, dense buds that absolutely drip with resin. In fact, this is how the original Gorilla Glue got her name, the resin production was so extensive it would “glue” trimming scissors together after just a matter of minutes.

We have spent years perfecting this cross to ensure that when you get stuck to your couch from the first hit of Gorilla Bomb, you will have nothing but smiles for hours and hours.

will grow again . Review by Kelly
growing 3 of these, this past season . was impressive for sure . This year i'll grow them outside because they out grew my green house by the time they flowered. the buds were too heavy and required added support . nice high ,intense at times . (Posted on 12/22/2020)
great plant super structure less then half inch tall 4 nodes topped it and tied down and trained . I feel the company has no quality control though Review by grant
cut to keep level and increase branch thickness at lower levels while trained the 4 main branches out level 2 months in now it is 2.5 feet square and 6 inch tall like a mini umbrella the stocks are about 2-3 inch thick already at the bass just beasts for uptalking food . now the reason for the 4 star rating is when I ordered a package of 5 they arrived but clearly 2 of the seeds where inferior . I almost didn't plant them I started the three good looking ones and an Alien tec . then decided to try them . they turned out shit they are tiny they took way longer to grow the seeds where almost white the plants from these two are 10 % the size of the other three . I have selected the best two gorilla bombs couldn't pick the better one and will seed these two . I feel the company sent me inferior seeds knowingly you can not miss what these seeds looked like so is no quality control or they sent them intentionally the product is amazing the company I am not sure about why the 4 star (Posted on 11/17/2020)
Healthy, lush plants, high quality seed Review by Likwidreamz
Seeds sprouted April 18th and were put outside June 6th so about a month outside now. I seeded two plants and both are about the same size, 5 foot tall and lush green. They are going to be monsters, it;s only mid-July. Will update as the plants progress. (Posted on 7/11/2019)
Awesome growth Review by jamie
Still in veg, this plant took off, very fast growth in soil using liquid organic nutrients. Will update in about 3 months very happy so far (Posted on 3/20/2019)
Potent Review by Rita
Flowering period is longer than 9 weeks but the pot is extremely potent and stinky so its worth the longer flowering time (Posted on 10/20/2018)
This was an amazing plant. Review by Matthew
250g with mars 400 LED in a 4x4 grow tent. One shot really tall when switched to flower, the other 4 were all physically the same size as each other . 5 different distinct flavours out of the 5 seeds. (Posted on 7/9/2018)