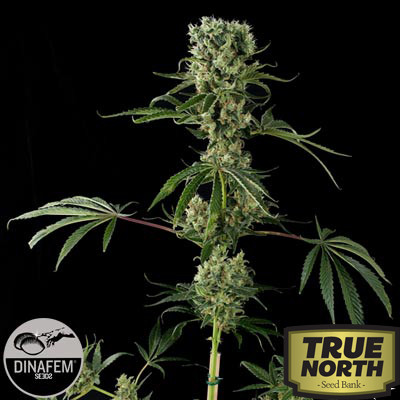 Moby Dick#2 cannabis seeds by Dinafem Seeds belong to a feminized, Sativa-dominant cannabis strain that results from the cross between a JYD Haze and a Northern Lights. It is a marijuana plant that remains faithful to its successful predecessor.

Moby Dick#2, the 2nd version of Moby Dick, carries over its main traits. It is a beautiful, fast-flowering, easy-to-grow, big marijuana plant that grows very vigorously and produces large, dense buds brimming with resin. Its Northern Lights genetics contributes to a great yield.

Moby Dick#2 is a marijuana plant with a short growth indoors, where it does wonderfully particularly with a SOG system. Outdoors it responds best to temperate/Mediterranean climates and to the greenhouse. Unlike its predecessor, this version does not require extra nutrition.

The flavor and aroma of Moby Dick#2 are pronounced, with hints of lemon, sandalwood, spices and incense. The effect is powerful, more cerebral than physical and long-lasting. It is the perfect cannabis strain to unwind after a hard day.