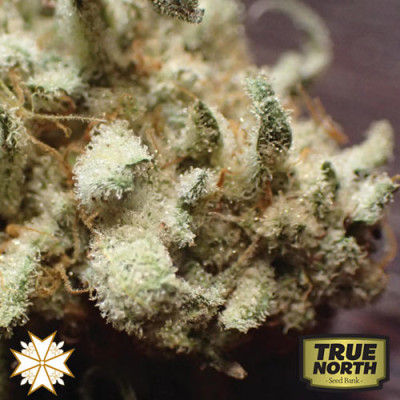 Aficionado French Connection is proud to present the limited edition Vetrus OG 5th generation, straight from the most remote mountains in the Emerald Triangle.

Be ready to find authentic and forgotten flavours of the original OG Kush and the Sour Diesel IBL, that will bring you back 20 years.

Vetrus OG will delight the most demanding growers; it possesses a compact structure and a short internodal distance, accompanied by numerous ramifications loaded with compact and white buds of trichomes.

The natural bearing of this plant makes it as well suited to the so-called S.C.R.O.G cultivation technique as for S.O.G.

She is the result of 5 years of selection and breeding outdoors under the sun of the Emerald Triangle, which makes her the first choice for all breeding projects.

Due to its rusticity, it is as well suited to outdoor as indoor cultivation, where it will reward you after 9 weeks of flowering, with an abundant harvest of first quality flowers, rich in THC and Terpenes.

The elite clone of Mendocino Og Kush was chosen as the Mother on which the pollen from a private selection of Sour Diesel IBL 2005 was applied.

The Diesel line was selected by Leo Stone from a pack of 10 seeds of Sour Diesel IBL from Rezdog’s dating from 2005 (the same edition where the famous Riri Cut was selected).

In order to avoid the risks of inbreeding – due to breeding an IBL strain – but also in order to re-enrich the genetic pool and in the process of making a selection on a maximum of subjects; the so-called open pollination was done from the best males and females in this pack.

From the best phenotypes, the original diesel type was selected over two generations before Professor Q used it as the starting male for the Vetrus OG!

5 years later, the Vetrus OG is finally available in limited edition, only with Aficionado French Connection!