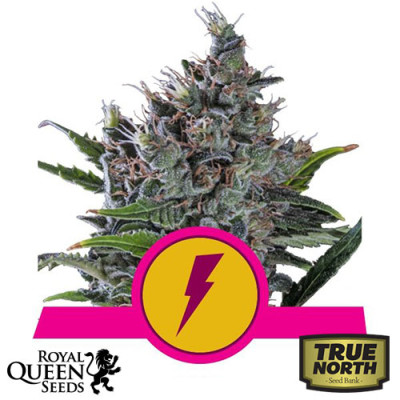 The imposing structure of North Thunderfuck gives a mild indication of the sheer force her high can inflict. Resembling a small Christmas tree, she is the gift that can provide all year round. The original Alaskan Thunderfuck was rumoured to have been a cross between a North American sativa and a Russian ruderalis before an Afghani strain was also added. The delicate but sophisticated skills of RQS' expert breeders has given rise to our very own iteration. Despite the mystery surrounding her initial creation, there is no doubt about the unrelenting potency her modern genetics offer.

The high starts deceptively. Building in flavour and impact with each hit, up to 23% THC begins to creep through your body. Her citrus scent envelops the senses, encouraging you to indulge in joint after joint. As the phenomenon starts to build, even marijuana aficionados begin to feel a tingling sensation settle into their bodies. Before you know it, euphoria hits like a train, knocking you back into your seat and keeping you there for several hours. Waves of uplifting happiness continue to wash over you as her earthy, piney notes assert themselves more and more.

Don’t worry, with great power comes relatively simple growing requirements and high yields. Her diverse heritage gifts many highly desirable traits. A love of colder climates matches moderate resistance to disease. Conveniently, being tolerant of colder temperatures goes hand-in-hand with her preference for being grown outdoors. Indoor growers will still be met with the same resinous buds as their outdoor counterparts, but outdoors she is free to stretch. Flowering time is roughly 65 days, a drop in the ocean when you consider the dank haul that awaits. Outdoors, growers can expect to harvest mid-October.