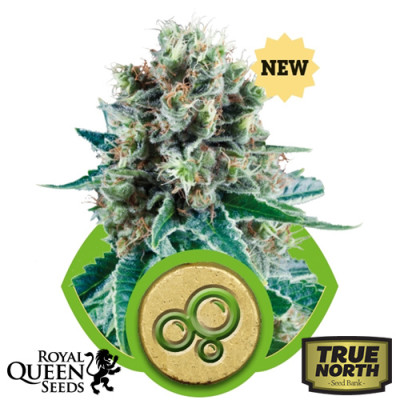 This variety was bred to incorporate the best elements of all strains to create a plant that is both easy to cultivate and presents a fantastic product. This strain has a pleasantly sweet taste with subtly earthy undertones and a strong, stony, positive effect.

Bubble Gum
From its origins in Indiana to its later development in the Netherlands, this world-famous indica strain has developed notoriety for its easy-going yet soaring effect. The distinctive sweet taste and smell of this award-winning cannabis contributes to the similarly idiosyncratic yet pleasing sweet flavour of Bubble Kush Automatic.

OG Kush
This exceedingly popular strain has qualities of both indica and sativa, and its intense and long-lasting effects have played no small part in the variety's fame throughout the world.

As far as growing is concerned, these seeds are autoflowering. Unlike traditional feminized seeds, such as traditional Bubba Kush and Bubble Kush Feminized seeds, growers do not have to worry about making sure the plants get 12 hours of direct light a day. Thanks to the ruderalis elements of this strain's genetics, these plants flower on their own within about five to seven weeks, just like other seeds such as Bubble Gum Automatic or Bubba Kush Automatic, both of which are similarly beloved by growers for yield and ease of growing.

When growing outdoors, Bubble Kush Automatic is ready for harvest in seven to eight weeks. Indoors, fully grown plants are 70 to 100 centimetres high, and outdoors the height ranges from 100 to 140 centimeters. Growers can expect a healthy yield of 120 to 170 grams per outdoor plant after drying.

Once harvested, this variety packs a wallop with 16 percent THC. The dominant effect reported with this strain is a sense of euphoria, with many users noting this variety's usefulness for stress release. Since this cannabis is genetically 55 percent indica, typical incida effects are also present including increased appetite and physical relaxation. Some insomniacs find this strain useful as a sleep aid, but the well-rounded high does not leave users feeling overwhelmingly lethargic or drowsy.

These hardy seeds are ideal for growers who desire a fast growing and automatically flowering plant that does not require the same effort as more traditional feminized seeds. This hybrid strain is continuing to earn fans not only for its straightforward growing process but also its agreeable taste and robust effects.

Buds be poppin' Review by Plouffe
Grow #2 of this strain. First harvest was 240 grams of beautiful smelly dense buds. This harvest is already looking better. Resilient plants with fast paced flowering. Big buds that smell amazing. The plants have had a tendency to stretch so keep the lights low early on, and keep decent air flow. The plants allow for trimming of the lower fan leaves that suck up energy from the flowers - no visible shock or stunting at all. Beautiful strain. (Posted on 6/23/2020)
Resiliency in a Seed Review by Plouffe
Hey guys. Noobie grower here just wanting to say I am so thankful these seeds are as strong and resilient as they are... I started off with nutrient deficiency because I didn't realize I was only giving 1/32 full nutrient doses. Also, I didn't bump up my Bloom and Micro when flowering started. On top of that, I fed it too much epsom salt in hope it would help recovery. Got me some nasty salt lockout. Flushed, bumped up nutrients and all plants still going strong. Too much space between nodes and tall AF for AF's but they still in the game after taking a beating. Attempt 2 will be the same seeds. I will update review now that I'm a master grower (joking) (Posted on 3/12/2020)