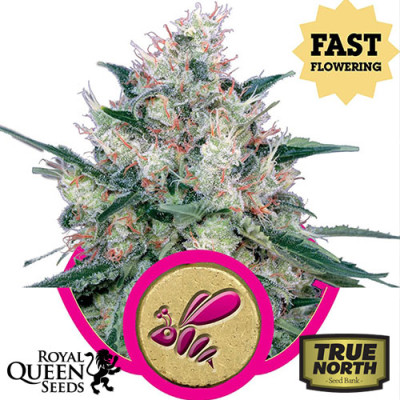 After flowering starts, it will be ready to harvest in 6 to 7 weeks, but don’t rush – let it mature fully and you will be rewarded with a potent harvest.

Indoors, it will normally yield around 500 grams per square metre, under a 600 watt light. Experienced growers may even achieve up to 650 grams per metre.

Outdoors, it will be ready in September and will yield around the same per plant, depending on the climate and conditions.

Honey Cream has an intense, sweet sugary, almost caramel-like aroma. The flavour, while not as sweet as the aroma, is sweet and almost earthy.

Due to its complex genetics, a variety of tastes and smells can come from these plants, but the sweet, creamy caramel aroma overpowers all.

It grows like a classic Indica – short and bushy, with a huge flowering top of dense, resinous buds.

The effect, as you would expect from such an Indica, is a heavy, relaxing stone.

All of this makes Honey Cream a great strain for Indica lovers.

Now with a Faster Flowering time than before!

Great smell and taste Review by D
Great producer, great smell of caramel and taste, very quick 6 week flowering, grows buds fast! (Posted on 4/17/2018)
Honey Cream. Review by Superwoman
If you are a female; this strains is amazing for female's body system. This strain helps everything to help our bodies to funcation properly. I apply this concept: Bees stings some people have severe reactions to it - not with this bees strain - I would rather that to stings me and I blooms! Beautiful lady of the plants, will have to order more sometimes soon!! High Recommend for women out there. (Posted on 11/14/2016)