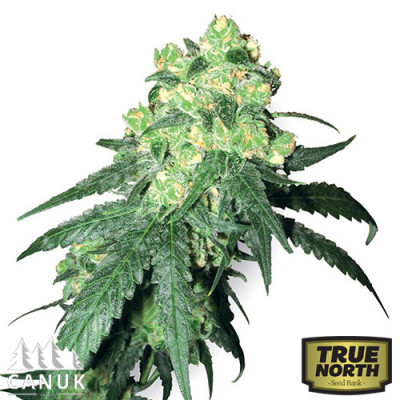 Canuk Seeds White Rhino has its genetic origins in Afghanistan, Brazil, and India.

Our White Rhino has a fruity smell, with a very intense sweet and floral taste, accompanied by a heavy almost narcotic effect.

This is an intensely potent hybrid that has been bred to maximize the resin content and yield of the famous White Widow.

She has huge, dense, crystalf-rosted buds, White Rhino by Canuk Seeds is a plant for all Indica lovers and commercial growers.

This hybrid is also useful for medicinal purposes, due to a high THC content coupled with significant amounts of CBD and CBN. It's used with great success as pain relief, for combating Multiple Sclerosis as well as being a great sleep aid.

Niiiiice! Easy and quick grow, great taste, great buzz. Review by Bootsy
Grew one outdoors in Nova Scotia. Harvested 3rd week of September, and had almost no bud rot compared to others. Most awe4some taste and effects. It really does seem to have pain reliving qualities but doent put me to sleep. I only lately noticed she has a high cbd, which explains some. Cloned easily and kep her small indoors for a 2 oz production with almost no vegging. In general, a short busy plant that seems super tolerant. And - one of my favourites for years. Strongly recommended Indica. (Posted on 10/13/2021)
Sweet, fruity taste and high yield Review by Taz
I found the Canuk White Rhino to be very easy to grow indoors and outdoors. Cut some with 20% amber trics and then the rest with 80%. I found the later is a real couch lock effect whereas the earlier cut is perfect daytime medicine (Posted on 5/14/2021)
Snow in the tent Review by Bunker
The buds are covered, I meant, really covered in trichome. Maybe it is just the lucky phenotype but holy, awesome seeds. (Posted on 5/11/2021)
solid indica smoke Review by Ontario grower
grew this outdoor inac. 5 gallon pot only using solotek bloom nutes. I'm a noob. still pulled 100 grams dry. no lst. ended up with small nugs and lots of larf due to my inexperience as a grower. good smoke. hits hard later as a creeper and great for sleep as the buzz winds down. very low odour strain until the last week of flower. also stretched and grew 7th ft only using sunlight. would definitely grow again. canuck seeds are legit good (Posted on 12/16/2020)
Consistent morphology Review by double D
I'v grown this cultivar a couple times over the passed few years and the morphology seems to stay the same. Typical indica growing short and bushy. Took very well to LST and topping. My last run was in 3g pots grown in coco with organic amendments. 2 x SF1000. The buds were very dense and frosty. I ended up with two phenos, one with bigger more dense nugs and the other with smaller more frosty nugs. I ended up with just over 3oz from the 2 plants and about 2.5 oz of larph. I make dry ice hash so I will get close to an oz of hash from that as well. No issue with hermie with any of my grows as long as night time temps stay above 20. Still had some decent purples in the leaves come in around wk 5. She did finish in just 7wks. Will grab more of these to cross breed with as taller indica in hopes for a larger higher yielding plant. (Posted on 11/19/2020)
Grew very well but plant was thick, had to do alot of defoliating. Review by Rainman
Tornado came through and stripped most of the leaves in my outdoor grow, All plants bounced back well. After that all 20 plants grew so thick we had to do some major defoliation a couple times to keep PM at bay. Nice super healthy looking plants however. All seeds germinated . (Posted on 9/18/2019)
Ran me over Review by Travis
I ordered a pack of 100 and was not disappointed. To be honest I have had to go easy smoking this, it put me under a few times. If you are an insomniac this will fix that right up. I germinated 12 of my beans so far and all made it. I had one out of those 12 dwarf on me but I think it was because I scarred it a little bit too much and made it into the seed hull. However I grew it anyway and that little plant had an ounce on it of some amazing fire bud. the other 11 grew to about 4.5 feet and bushed out in full form. I grew outdoors last season, I harvested mid November for my region. I will not disclose my region though. I harvested just a little over 22 ounces per plant averaged with the 11 big ones. 1 ounce on the shorty. I had no issue growing and no mold to speak of, this plant did attract some bugs but nothing liquid spinosad couldn't remedy. Overall great genetics, very vibrant and rigor during flowering. She really impressed me. A word of caution, take 1 hit and set it down for a few minutes before hitting it again. I am not kidding go easy this will hit you like a RHINO! (Posted on 1/31/2019)
Vigor and good genetics Review by Ivegrownb4
Funny story but a testament to the vigor and toughness of this seed. Seed craxked in water in 24hrs. Sprouted in papertowel 24hrs later. Put it in spil and it emerger within 48 hrs.

I had it in my window sill. One day I went to qork and my child pulled the sprout out of the pot. (Posted on 7/29/2018)
Ok plant with a low yield average high and unforgettable flavor Review by Hunter
This plant only scored a 4 due to flavor. It was amazingly fruity and sweet with tones of banana and fruit salad. The plant grew fairly short with thin branching but did take well to topping. The nugs were small and not as dense as I would like to see. She did go hermie but I have noticed that this tends to be a trait of fast flowering plants (and if you look in the picture it looks like theirs went hermie too). The lack of density made for a lower dry weight. The flowering was very fast at about 6 into the 7th week. The high was relaxing and I was able to sleep very well on it. The flavor was on point (I did use terpinator) (Posted on 2/21/2018)
Okay Review by ChronicSmokeToke
My first run went alright. She really explodes in growth during flower. Don't let the temps get lower than 20 Celsius or you will run into hermaphrodites, lost most of my indoor crop once the winter and cold temps hit, Didn't have my basement insulated enough. However, my other genetics survived. very pungent and fruity smell. The hairs turn a beautiful orangey red colour. (Posted on 2/4/2018)