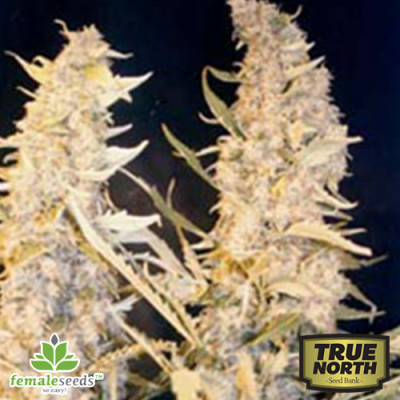 Of course Female Seeds had to bring a skunk variety into their strain-list. From all the Skunk-varieties that are on the market right now, they selected a fast producer of enormous buds with a strong skunk aroma and a heavy buzz.

Skunk Special is quite a stable strain with a little variety between the individuals. It all started in '83 or '84 when Sam The Skunk Man himself was in Holland to do a Skunk project for in dutch greenhouses. The best one was selected out of around 10,000 (!) plants in this project and was cloned in selective circles within Rotterdam, Holland.

It was actually only used by greenhouse growers in Rotterdam and surroundings and was nicknamed 'het Sammetje'. (a Sammy) Then in 1990 it arrived in Amsterdam and the A'dam scene had a go with it, continuing on through the whole of Holland.

The genetic make up is mostly a Mexican Columbian Sativa with that Skunk piss smell. I guess this could be called the old school skunk. Female Seeds selected this one, as it was found to be the best performer out of all the Skunk varieties available.

This latest batch of seeds is from the same origin only after a few generations of selecting the best plants that have come to an earlier maturing, more stable (more equal, uniform) batch.

It also needs to be noted that this strain is really perfect for outdoors as it does really well in temperate climates.

Like getting hit in the face with a bag of oranges Review by Kodie
Started 4 of these ladies all sprouted in a week. Doesn't look like anything special in the bag but never judge a book by its cover after first initial smoke wow is all I can say very pungent smell long lasting high very little to no burnout feeling (Posted on 3/9/2017)